Muay Thai or probably just about any combat or non-combat sport has stories.  Stories about the journey of men and woman, who’ve struggled, clawed their way to victory… or defeat. The thing we often fail to notice is that any sport or martial art is a way of life. It’s a disciple, a study, and well…a life style. And the growth of yourself should be your ultimate goal. Often, we lose sight of that. With our eyes on the goal, we completely miss the fundamental concept that, one must learn to crawl before they learn to walk. Now, as a child, I just started walking. But, I still had to take my time and learn how to stand, balance, and take steps and so forth. This applies to Muay Thai. Everyone wants to learn all this fancy stuff, but then when the pressure is on, their game falls apart because they have no foundation. they’re a house built on sand.

People push through blood sweet and tears to compete. Mind over matter, they say. But let’s be honest. Looking at the lives of many of the fathers of the mind over matter movement and coaches in our high schools, we find a long line of heart attacks. PTSD, depression and deaths linked to exhaustion. We often look at athletes, and compare ourselves to them. But let’s be real, no one becomes an Olympic or NFL athlete over night. It takes time. Time and understanding that the commitment you’re making, is to a life change. Not just to get in shape, or some fad diet. And yes, you’ll fall off the horse. we all do. but what matters is that you get back on. For instance, if you’re training Muay Thai, you are taking on the life style of honor, respect and the desire to challenge and achieve your best. Learn to be patient. Learn to smell the flowers. Listen to your body, it give data as to what is happening in the rest of your body. If you’ve pulled something, train around it. Don’t ever push “through the pain” that’s how you get hurt and knocked out of training for a couple of months. If you’re exhausted, take the night off, and come back stronger tomorrow. It’ll prevent you from taking months off to recover, or a year off for rehab.

Just look at how tough the Thai’s are when they’re boxing. It’s because of how long they have been doing the sport. Their bodies have had the time to adapt to the conditions and needs of the sport. When we look at the data set, in regards to performance, Olympic and pro athletes all perform better when rested and ready to go. It’s not like this is just my opinion. All the research has been done. And the scientists have looked at the data. We don’t need to figure out… it’s already concluded.

And, I’ll admit that I’m guilty of grinding myself into the ground like in my last fight, I was grinding myself too hard. I was focusing on trying to get three titles in one year. Instead of the fight it’s self. I was burned out, and tired. I just wanted to get it over with. And I got caught with an ear punch, as a result. This busted my ear drum in the middle of the fight and screwed with my equilibrium. But, when I fought and won the TBA, I learned to slow down and listen to my body, when it needs rest… my performance levels went through the roof. And I really attribute the state of mind to my victory.

The down side to this is the mental toughness that comes from grinding it out. However, you can build this in less self destructive ways. Sparring hard with headgear, and with a trusted partner, and pushing through. There are a million more productive ways to strengthen your mind.

I’ll sum up my blog, before I go on rambling about the same thing over and over. We focus too much on the end goal. If you focus on the finish line, you’ll stumble over the hurdles. Learn to focus on the job at hand, and clear your mind of winning the final round. Win every exchange, because pennies add up to dollars.

There is a book, which a good friend recommended to me called Body, Mind and Sport, By John Douillard.  It’s got some hokey stuff in it, pre-warning you. But the overall synopsis of the book opened my eyes. 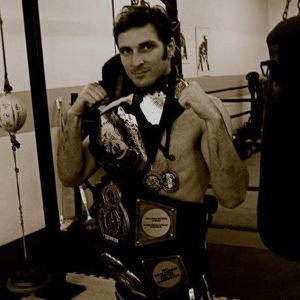 I don’t think many people understand the sacrifices that fighters make. The days of people, walking off the street and into a ring or cage are long gone. Muay Thai is a test of athleticism, intelligence and resolve. In simple terms, Muay Thai is the equivalent of playing chess at a hundred miles an hour. It’s about body, mind and spirit. And no one make more sacrifices then the fighters. As an addition to working full time jobs, we train tirelessly in preparation. The fight is only the final product of a life time of work, and 3 months of conditioning and preparatory work. And usually we end up fighting for free or small purses, at the end of the night. And as a Thai boxer from Texas, I not only spend time away from my loved ones, working away in the gym. It’s also the time from work and money spent traveling and trying to avoid the pit falls of match “set ups”. It’s trading your warm bed at 5am, for a cold concrete floor at the gym. I’m blessed in the sense that I have a wonderful team of people that I am lucky and proud to call my friends.

It’s not a glamorous life at all. The rewards for the labor invested are always small. It’s not a montage; it’s not an epic movie. Its mornings alone in a gym at 5am, it’s facing your fears. And at the end of my life all my titles with rust, fall apart and gather dust. The real reward is when someone tells you about how much you’ve helped them or inspired them. It’s pouring into people. It’s the love at which you invest into people with no expectation of a return. Those are the real title belts, the real trophies. It’s the friends you make. And it’s constantly picking one’s self up when you fall down and fail. It’s about the fire, it’s about the hunger. And in today’s world we lose sight of what’s really important. I know a young man from Oklahoma, who is the biggest champion I know, his record is 0-5. But he has a fire in his heart. And no matter how many times he’s knocked down, he keeps getting back up. Now that’s perseverance. That’s fire. That’s passion. It’s carrying our burdens, with class like gentlemen. It’s living a life with the highest code of honor and integrity. Of course no one is perfect, but as long as you try, and give it everything you’ve got.

Today I got up at 5am. which is surprising, considering that I got up Sunday at 5am to drive to Dallas helping my brother in law move. Getting out of bed, to meet a cool wooden floor. I turned on the lights, and wake the cats. At which, they probably are asking what the heck is wrong with me.
I get dressed and head out the door to the gym. Leaving my warm bed and wife, the iron awaits.
I get to the gym, and I’m greeted by a 6’8″ giant goofball.
(i honestly don’t know how tall he is) Nicks a fun guy. I dare say he’s as goofy as myself.
I load my weights and proceed with my power clean morning until 6, at which than I have to leave and get ready for work.

Today I’m not training. I’m just heading up to the gym to hold pads for my team mates. I’ve got some stuff up my sleeve for Sammy the bull, that I’m pretty excited to work on.
The team is revving up, getting prepared for feb 16th in Tulsa, and the legacy FC card in march. 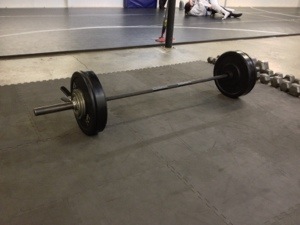 Welcome to The Fighters Life with Nethaneel Mongonia. This blog is all about Muay Thai and the personal journey’s of my team.